FRIENDLY FRIENDS AND FAMILY TOO 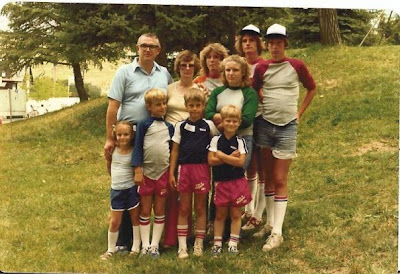 I love these people, I love this picture and I love my family. My parents were brave enough to have 8 kids and I was the caboose. I know, I know, I was cute, right?
Front Row (L-R): Marianne, Matt, Mike, Myron
Back Row (L-R): Dad (Don), Mom (Mary), Debby, Denise, Mark, David.
Serious, what year was this. We apparently wanted to be some sort of sport team. Ha! No really, I love my family very much and I just have the best memories growing up. My parents gave a lot for their family and I really appreciate that now that I am grown and have a family of my own.
Posted by Marianne and Ben at 8:54 PM 4 comments: 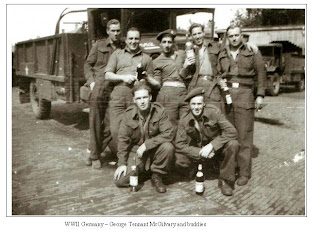 I just love this picture. I got it from my Uncle John's Facebook page. It is of my grandpa McGilvary, he is the one kneeling on the left, and his buddy's in Germany while serving in WWII.
I don't know a whole lot about my grandfather but I am was so moved by this picture I had to post it.
Posted by Marianne and Ben at 8:36 PM No comments: 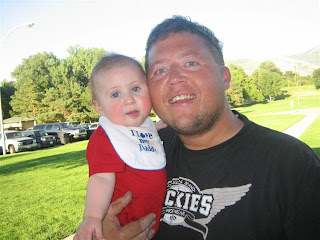 Here is a picture of Zach with Uncle Peter, Ben's brother. August 1st is Switzerland Independace Day. Obvoiously this is a late post but I really like this picture. They are cuties.

Posted by Marianne and Ben at 8:30 PM No comments: This is my brother Matt (on left) and my brother in law (Xandi). Leanne, Matt's wife, sent it to me as a reminder of the younger days. This was taken in 1994, no later than a year after Ben and I started dating. I am sure it was at church ball or something. My brother Matt, well his wife, Leanne basically got Ben and I together. Yes, we have been together since 1993, that's 15 years ladies and I am thankful everyday for Ben and my kids. Thanks Leanne!!!

"I just called to say 'I love you'. I just called to say how much I care".... Do you remember the old days of calling friends and family on the telephone to see how they are and what they have been up to? My brothers hate it when I email them, saying it is to impersonable, especially for family members. And you know what? I think that they are right...to a degree. I can't tell you how many time I check my friends and family's blog sites to see if they have added anything new or interesting or check my email or my facebook and on and on, when I could have just picked up the phone to see how they are doing. Sometimes it is nice just to get a call, even if just for a moment. That's all. Now don't get all "oh, what is wrong". Nothing is wrong. I have my kids and huband but it is nice to hear from someone else once in awhile. Another adult maybe. I just was thinking how crazy it all is. But I won't lie, I know that right after I push save and publish post, I will be checking out other blogs. One of my goals is to call someone every week or just once in awhile to see how they are doing. It just seems crazy how long I go with out seeing my next doors neighbors and the only time I really see my brother and sis in law and my own sister, whom live in my same neighborhood, seconds away, is at our parents house, in West Jordan, for crying out loud. Yes we are all busy but still that is no excuse to become hermits in our own homes. It'll be winter soon and then we'll all become like bears and hibernate. Oh well just some rambling thoughts........
Posted by Marianne and Ben at 3:12 PM 6 comments: 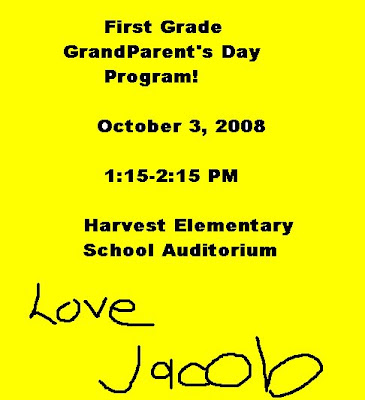 Posted by Marianne and Ben at 8:59 AM No comments:

Just wanted to let everyone know that at 6:13pm tonight Zach took 3 steps!!!!!! My friend Holly must have thought I was crazy, because I was calling her to send Jacob home for dinner and right when she answered it happened. I was screaming and excited and said "Zach took 3 steps just now" then I calmed down and asked her to send Jacob home. Whew, what a night!!
Posted by Marianne and Ben at 6:24 PM 5 comments: 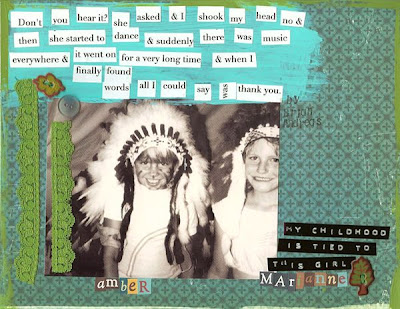 If you ever wanted to know what I looked like when I was a kid, well here you go. Amber and I have been friends for as long as I can remember. I still remember everything from kindergarten until present. This picture was taken at a Scouting program for our brothers. The scout leaders then were very artsy. Their house was painted in all pastel colors on the outside and then inside the mother painted murals on the walls. Anywho, they had large tee-pees in their back yard, seriously, as tall as the house, therego the big head dresses and facepaint. I just love pictures that remind me of when I was young. (sigh...) 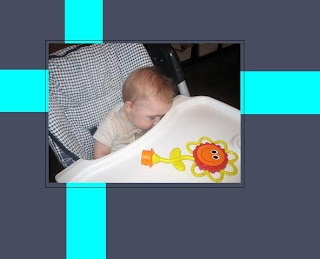 I guess lunch time is a bit boring. It puts Zach right to sleep!

A Day out with Grandma and Grandpa 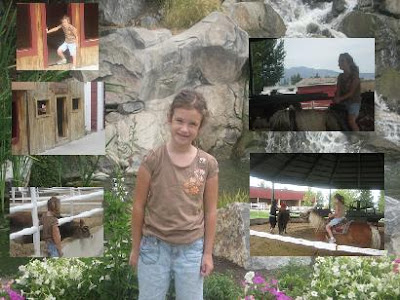 This summers adventure with grandma and grandpa Schmalz for Samantha was Thanksgiving Point Farms. Samantha loves the day that she spends with her grandparents. They like to take every kid individually so that it is their special day. Because it is their day then they will take the child where ever they want to eat. Since there is not a whole lot of options , McDonalds was the choice and Samantha said she was hungry. So when they went in side to order and asked what she would like to eat, she ordered a sundae. That's all, nothing else. So of course that is what she got and when she came home she was happy as a clam and told us all about her great day at the Farms, looking at the animals, riding the pony and getting drenched at the water area. All in all it was a great day. Thank you mom and dad for taking the time to be with your grandkids they (and we) love you both very much.
Posted by Marianne and Ben at 10:04 PM 2 comments: 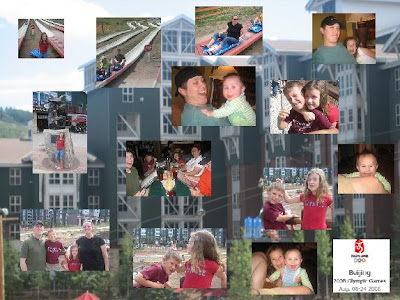 Every year our family goes up to Park City with Ben's family. His parents are gracious enough to share their time share with the family and we always have a wonderful time. I thought this collage would be better then individual pictures. The hotel behind all the pictures is where we all stayed. I think we were on top floor and we had such a beautiful view of the Alpine slide area and the mountain. We appreciate the time we get to share with our family and hope the tradition continous. 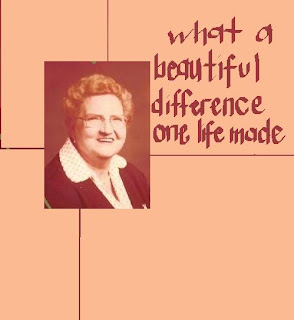 My grandmother was a big part of my life. We used to go over to her house every Sunday. Smells I can remember were bananas and spearmint gum. She is the best grandmother and loved her family very much. She was a faithful member of the church and I believe she served mostly in the primary, which would make sense since children loved her. She helped people out in any way that she could. She loved my grandfather and her three boys very much. I am so thankful for her for raising such a wonderful son, who is now my father and my childrens' grandfather whom they love very much.
(quote via my good friend Amber. I hope that it is ok that I used it.)
Posted by Marianne and Ben at 10:58 AM 2 comments:

Don't worry I am still alive and kicking. I haven't been the greatest about this lately. I have just been busy with work since Ben has been here as much. And I have to admit a little just blaw about it. I have really cute pictures but they are soo past the date it would be the longest blog in the world.
Just an update, I suppose I'll add pictures later :-)
Samantha's birthday came and went. She didn't have a party this year but a family party. Ok the family party is every year but we've decided that a party every year is too much and Jacobs birthday is just 2 weeks after hers. He just had the family party too. I meant to give a friend party but I just didn't have time to put something together. I feel bad about it, although I think he is over it, I still wish I was a better mom that way. Next year for sure! Plus I don't mind having stuff for him through out the year. Maybe a sleep over with a friend. One at a time. Slowly but surely.
Zach is 9 months old and cute as ever. He has both his front teeth and loves to walk the furniture. He can stand a second on his own but then plops down. I think he is growing way to fast. Here is a scrapbook layout that my friend did for a site she contributes to. She is talented and a great photographer. 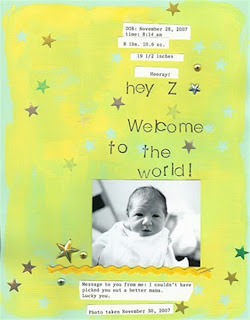 I just love this picture of Zach!! (btw: you can see her work on twopeasinapod.com)